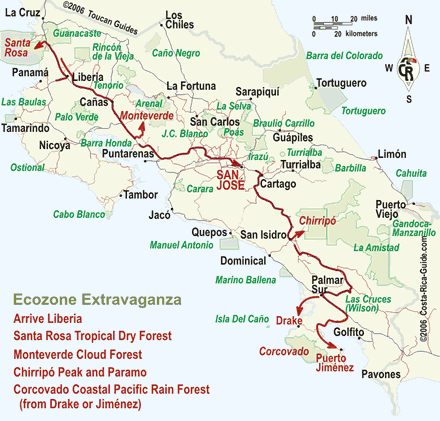 Costa Rica has one of the highest concentrations of ecological variety in one of the smallest areas anywhere in the world. This route is designed specifically to give you a chance to experience that variety. Tropical dry forest, cloud forest, rainforest and much more.

Arriving at Liberia Airport is your best bet for this itinerary.

Witch’s rock off Playa Naranjo is Santa Rosa’s most famous landmark and marks one of the best surf breaks in Costa Rica.

Santa Rosa National Park was initially established to protect the site of Costa Rica’s most famous victory when they repelled the American William Walker and his mercenary forces at La Casona.

It has expanded to include much of the remaining tropical dry forest in Central America and a number of pristine beaches including Nancite where Olive Ridley Sea turtles still stage mass nesting. Scuba diving is popular around the many offshore islands (access to surf and scuba via boat from Playas del Coco).
In the Region

The high mountains of the Cordillera de Tilarán literally scrape moisture out of the clouds at Monteverde and Santa Elena Cloud forest reserves.

The best known canopy tours and some of the most popular day hikes in Costa Rica are in this region. The cloud forest is also home to the most famous avian resident, the resplendent quetzal and a majority of the hummingbirds as well as the largest concentrations and varieties of epiphytes including orchids.
In the Region

San José is the capital of Costa Rica and home to the National Theater, Planetarium, a number of beautiful parks, as well as world class hotels, casinos and restaurants.

The mercado central, and museums of Jade and Gold are all worth a visit. Popular day trips to local coffee farms, whitewater rafting rivers, and canopy tours through the rainforest treetops can be arranged through most hotel tour desks.

Several National Parks and Reserves are within easy reach of the capital including Poás and Irazú volcanoes, the Lankester Botanical Gardens, and Braulio Carrillo rainforest.

Because of it’s central location San José is a transportation hub and most roads and domestic flights pass through. Juan Santamaría is Costa Rica’s main international airport located approximately 18 km west from the city center.
In the Region

Cerro Chirripó National Park protects the highest peak in Costa Rica (12,532 feet) and unique tropical oak forest and high altitude paramo ecosystems. Climbing the peak is a great reason to visit but there are many other attractions in the region including some of the best birdwatching in Costa Rica. The cloud forests on the flanks of the peaks are every bit as beautiful as Monteverde but much less visited.
In the Region

Drake and Jimenez – Gateways to Corcovado

Drake (Dray-Kay) Bay is one of the most isolated destinations in Costa Rica. Although there is one very rugged seasonal road most visitors arrive by small plane or boat. The road is paved all the way to Jimenez and many trekkers arrive there by bus.

The main attraction is Corcovado national park which is one of the last best remaining examples of the tropical lowland rainforest ecosystems anywhere in the world. Tapirs, all four species of monkeys, both species of sloths and hundreds of birds are just a few of the animals you’re likely to spot. Offshore there’s Cano Island which has excellent snorkeling.
In the Region

Your interest in this itinerary will be automatically included in your request if you use the quick contact form on this page for more information.