One afternoon when driving Costa Rica’s “super-highway” 27 Sue and I both exclaimed simultaneously “Woah!  Did you see that?” in an incredulous tone.

I looked around to see if there was Ocelot kicking a rolled up Armadillo like a soccer ball but no, we were both exclaiming about something neither of us had seen in 25 years of traveling Costa Rica’s roads. It was a traffic miracle.

An antique clunker truck had actually stayed in the right lane and allowed a semi to pass.  Not only that but after passing, the semi moved to the right to allow us to pass and continue almost without slowing. 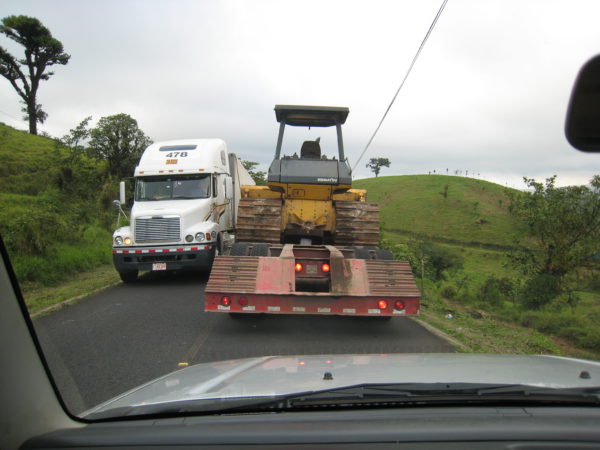 The standard protocol after a “carril a adelantar 250 meters” (passing lane ahead) sign is for every driver to prepare for battle.  A few seconds later signs declaring “transio lento mantener a la derecha” (slower traffic keep right) and “camiones sólo carril derecho” (trucks right lane only) mark the beginning of the extra lane and the jousting commences.

There is always a tiny fantastically overloaded banana (…or possibly mango, watermelon, pineapple, sugarcane, etc.) truck going 27 kph (16 mph) at the head of a line of one or two hundred vehicles.  The farmer floors it belching out a huge batmobile like smokescreen of diesel emissions.  Pedal to the metal his speed creeps up to 31 kph (20 mph).

The semi slams on his brakes and jerks to the right to avoid the collision then floors it again to attempt to get by on the right.  Of course he’s lost all momentum and can’t regain passing speed on the steep hill.

The two trucks drive side by side blocking both lanes until a “ceda” sign announces the end of the extra lane.  The joust is over and normalcy returns to the road.  A few cars may have changed order behind the leaders but no one has passed the trucks and the huge line continues creeping along.

Occasionally a big V8 luxury SUV (or bus, or empty semi) gets frustrated, breaks free of the pack roars up to 140 or 150 kph moves into the oncoming traffic lane and passes both of the trucks while they’re doing battle.  Every few days an SUV slams headlong into a Yaris killing all the occupants and greatly inconveniencing the SUV driver.