You want the good news or the bad news first?

At the beginning of June 2016 Southwest Airlines made a couple of big announcements about their Costa Rica flights to Liberia (LIR) and San José (SJO) International Airports.

Round trip fares under $250 including two bags, taxes and fees direct from gateway cities like Houston and under $350 round trip with one stop from other cities like Denver are some of the lowest fares we’ve seen in years.  Especially since they include the $29 Costa Rica departure tax now.  The prices are only good for a couple of days through June 9.

Bad News – 13 foot Sharks on Board 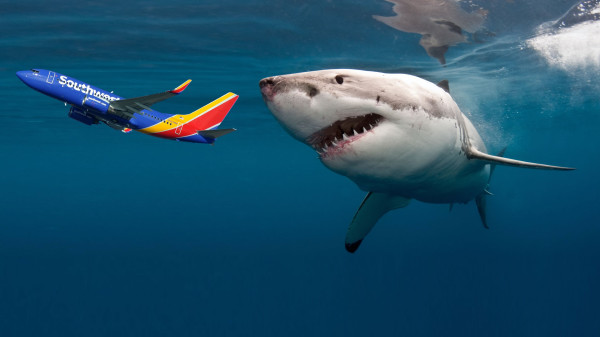 Another press release from Southwest says that in celebration of the Discovery Channel‘s popular “Shark Week” they will start showing the movie “Jungle Shark” as part of the in flight entertainment on their Costa Rica routes.

It’s a documentary about how man eating bull sharks can survive in fresh water and swim up the Río Sirena in Costa Rica’s popular Corcovado National Park on the Osa Peninsula.  The scientists are surprised to find that the sharks grow to four times the size they expect and 4 meter (13 foot) monsters are destroying the traps they set out for 3 foot juveniles.

Here’s the kicker.  They’re surprised to find sharks that big because they figured that the 18 foot crocodiles would have eaten anything over 3 or 4 feet.

Lot’s of people are headed to Costa Rica for the wildlife but isn’t that kind of like showing “Earthquake” on a flight to San Francisco?  I’m not sure the Costa Rican tourism board would approve of giant sharks and crocodiles as on-board entertainment but we’ve already booked our flight!  What are you waiting for ;-)