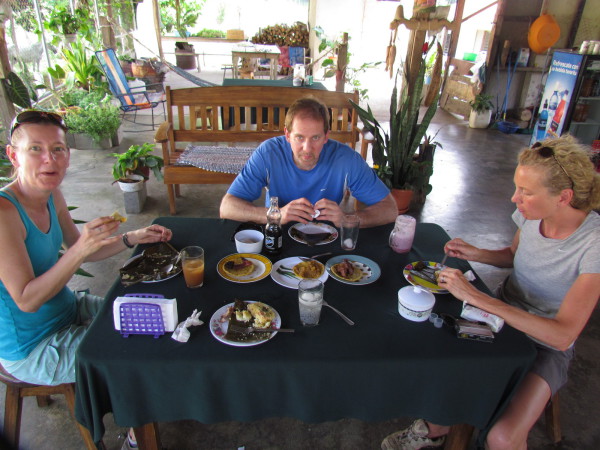 “Fast food” has been in Costa Rica for decades in the form of Pollo Frito which as the name implies will fry you part of a chicken and Sodas which offer quick traditional meals.

The quality varies a lot.  The soda El Río on the southern edge of La Fortuna near Arenal volcano has excellent, hot fresh arroz con pollo (chicken with rice), burgers, ensalada palmito (heart of palm salad) and other favorites in large portions at fair prices (actually very low prices for a tourist town!).

On the other hand at some sodas it’s possible to be served crunchy dried out rice with stringy chicken leather that’s been in a warming tray since the day before and might qualify as a winning entry in the microbiology category at the high school science fair.

Ask locally for recommendations and take a look at what’s on other peoples plates before you sit down.

Cammie, Dave and Sue eating Tamales at Soda la Ceiba north of Bijagua – one of our favorites and one of the contenders for the best restaurant in Costa Rica.

Now there are U.S. chains in nearly every medium sized town and they’re still spreading fast despite the fact that fast food is fairly expensive in Costa Rica.  A Denny’s grand slam breakfast runs $13 and a burger “value meal” can be more than $10.  That’s pricey for tourists but crazy for locals who’s salaries average less than half as much.

One exception seems to be Subway where you can sometimes find approximately a colon and centimeter equivalent of the five dollar footlong (a ¢3,700 colones, 30 centimeter doesn’t work well in the jingle though).