…these stories of our bike tours have been resurrected form our second website which was created in 1999.  The first website we built was called cyclerica (get it…Cycle and Rica…) and was hosted on a Canadian provider called redrival.com several years earlier so my grandmother could see photos from our honeymoon.

Unfortunately although everyone says “be careful what you put on the internet, it will stay there forever,” between the host going out of business and several computer crashes there’s nothing left of that site that I can locate.  This quick summary post originally linked to that site for more but this is what’s left… 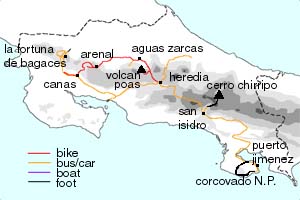 415 km and approximately 3,000 meters of elevation gain by bike

Our luna de miel in Costa Rica was a chance to discover just how huge a little tiny country can seem. Without a doubt the best part of this trip was the friends we made, but we also enjoyed Arenal volcano, a backpacking trip around Corcovado National Park, Climbing Chirripó (the highest peak in C.R.), and the hike up the river to the waterfall on the flanks of Miravalles volcano.