I gotta be honest with you.  I’ve never really understood the popularity of hot springs in the tropics.  With the thermometer sitting at 85° and the air laden with moisture at 98% humidity.  Why on earth would you want to dunk yourself in hot water to push that to 99° and 100%?…except for the swim up bars…maybe margaritas are the key.

Up near Monteverde in the cool of the high altitude cloud forest thermal pools might be more appealing. Unfortunately the natural springs up there are all either too small or too hot to soak in and no one has thought to build a resort and mix in some cool water.  Instead thermal bathing options are sprouting like mushrooms in the lowlands around Arenal Volcano.

Amoebic Meningoencephalitis is historically over 95% fatal but much of what is online is just social media hysterical misinformation.

The amoeba Naegleria fowleri enters victims noses and moves to their brain where it causes tissue damage leading to death in about two weeks.

While it does reproduce best at warmer temperatures this is not mainly a problem in hot springs.  The U.S. CDC assumes that Naegleria is present in any fresh water above 70°F.  Of course this includes hot springs but also most rivers, lakes, ponds and streams in Costa Rica.

It also includes freshwater in the United States in the summer.  The danger is not isolated to the tropics.  In fact there have been almost 20 times more deaths in the U.S. than Costa Rica and it’s found as far north as Minnesota as seen in the case-report map from the CDC. 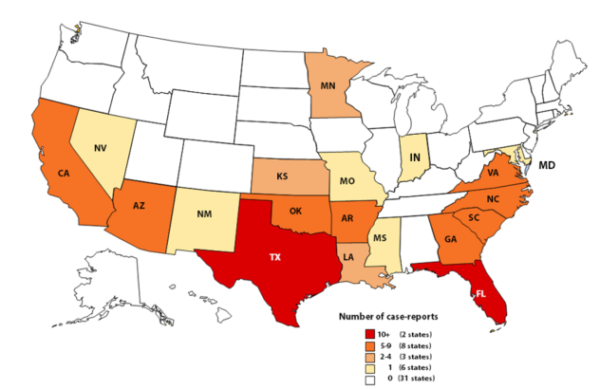 In the past there was no cure but recently, with early diagnosis, there have been successes treating with drugs during forced hypothermia and an induced coma.

Waterslides and waterfall jumping are two of the most effective methods of forcing the amoeba into the nose.

Prevention is easy. Keep your nose above water, plugged or swim in the ocean – the amoeba cannot live in salt water.  Blowing your nose after swimming is good idea.

Hot spring alley on the road from Fortuna around the north side volcano to the lake is home to a couple dozen springs, spas, mini-waterparks and resorts with thermal pools – including the original Tabacon.

New levels of luxury are being introduced every year and it’s possible to spend over $1,000 a night for a room including access to a spring.  Day trip options range from $25 bus in combos complete with beer and loud music sold to backpackers from the kiosks in town to elegant pool, dinner, wine and massage packages for the grown ups.

There are even still a couple of free natural options in the Arenal area.  Tabaconcito is on the hot water Río Tabacón just past the famous resort and the Río Agua Caliente (at the turn to the Observatory Lodge) has been protected from development by its inclusion in Arenal Volcano national park.

Note: Recently a traveler wrote to report that they were unable to find the spring along the Rio Agua Caliente.  As with all natural hot springs this one varies in flow and temperature depending on recent rains, the water table and flows in the river it’s alongside.

When there’s lots of rain or high water the heated mineral water can be diluted with fresh cold water until it’s no longer noticeable and when the water table is too low the spring may stop running.

We’ve stopped a couple of times since we first discovered it 25 years ago and have always found enough hot water to soak.  It’s possible though that recently it has disappeared as the activity of Arenal volcano has diminished.

The romantic appeal of relaxing under the stars as a warm waterfall massages your shoulders then toweling off and walking a rain forest path back to a bungalow has driven the growth in hot springs lodges and mini-resorts.  The Springs and Nayara Springs are the latest entries in the luxury category.  Arenal Springs Resort is a perennial favorite and the inspiration for the description of the night sky and little waterfall in the first sentence.  Other like the Royal Corin have more of a luxury hotel atmosphere and instead of the path you can just hop in the elevator.

Tabacón oddly enough requires either a walk or golf cart ride across and then along the highway since the lodge and the springs are on opposites sides about an eighth of a mile apart.

One of the best new destination resort and spa entries is another hot water river in Guanacaste – Río Perdido (also previously know as Río Agua Caliente).  Only about an hour from the Liberia airport it’s much faster to access from the northern beaches if you want to exchange the sand and surf for thermal pools.

NOTE: As of 2020 the east entrance and the trail to the Tenorio hot springs remain closed.  Unfortunately there was never room for more than a dozen people and now the area has been “discovered”.

Although we’ve been to all the resorts and spas over the years, by far the best hot water we’ve ever enjoyed were the natural springs in Tenorio National Park.  We hiked the loop from the then new Nayara group luxury eco-resort – Celeste Hideaway to the west park entrance, up to the waterfall, past the tenederios and out towards the east exit.  It was the green season, cool, misty, and raining intermittently so by the time we reached the natural pools we were ready for a soak.